Peugeot proves retro scooters can be French and affordable, and you don’t need to be Gregory Peck or Audrey Hepburn to enjoy them

Take a long, nostalgic look at this little sweetheart and imagine you’re weaving the streets of 1950s Rome, enjoying the delightful company of a young, frustrated princess who craves nothing more than a day of freedom and adventure. The good news is you don’t need to spend large on a Vespa to live out your Roman Holiday because Peugeot scooters are back in Australia and NZ, and the Django 150 is the French brand’s modernretro offering and the first of six models headed our way. Priced from $4990 (plus on-road costs) and built in France, the Django is apparently named after Django Reinhardt, the French/Belgian jazz guitarist, and takes its endearing styling cues from Peugeot’s S55 and S57 scooters from the 1950s, minus their toilet-like front storage compartments and two single seats.

There’s also the Sport S, with matte-black paintwork that detracts from the warm, fuzzy nostalgia feeling, and the Allure, which adds leather upholstery, a standard luggage rack and a small screen for an extra $200. What you’re buying in the regular Django, however, is a stylish, friendly commuter with a lovely, enclosed body and twotone paint that catches the eye and all but guarantees happiness. In fact, retro scooters would have to be the most endearing form of two wheels this side of a bicycle with a basket of bread, flowers and wine. The Django has a similar romantic appeal that attracts a warm reception from onlookers, all of which were starkly contrasted against the audacious and dark demeanour of a modern Mercedes-AMG alongside us at the lights. If the vehicles we own have the ability to affect our moods, these two would surely be extreme opposites. Quite unlike the 5.5-litre twin-turbo V8-powered AMG and its all-important hero figures, the Django is motivated by a Euro 4-compliant 150cc air-cooled single producing 7.5kW and 9.2Nm. Those outputs might sound more like a split-system air-conditioner’s, but they’re more than enough to propel the 129kg (dry) scooter to 100km/h without anxiety and keep you ahead of the pack when the lights go green. Except for AMGs driven in bahn-storming anger, of course. The Django’s white and very-retro 12-inch wheels and chubby rubber provide plenty of stability and agility for its intended role, although their diminutive size means they can find potholes and road ruts a bit easier than larger wheels. It’s hardly a deal-breaker, but if you are looking for something sportier then you’re probably better off walking over to the thoroughly modern Belville RS 200, with its larger 16-inch wheels and extra 50cc pep for the same $4990. Suspension and general ride compliance is otherwise fine – planted and predictable. Ditto braking performance, which features ABS at the front. General rider comfort is good, with a broad and nicely padded seat (770mm high) that allows you to sit at its edge, Eurostyle, or further back like a conventional motorcycle. Strangely, however, our test bikes had more engine vibrations at the ’bars and mirrors than expected (and certainly more than the Suzuki Address 110 with 4000km we rode in on) and there’s no park brake or brake lock function to prevent rollback while stationary at the lights. It’d also be nice to see some kind of ignition protection to prevent theft attempts with stabbing screwdrivers. What it does have, however, is all the important necessities of a modern scooter:

effortless manoeuvrability; lots of storage including a shopping bag hook (to secure the take-away noodles), and good fuel range. Retro charm, in this case, is an added bonus, further added by the zebrastriped rubber flooring. Many scooters have open storage bins around the knee area, which are handy to stash and grab small items such as phones, wallets and keys. The Django forfeits these for twin lockable compartments to complement the smooth bodywork. But there’s a flaw: you need to remove the key from the ignition and insert it into the secondary keyhole further down to unlock them, which is annoying. The right compartment is where you’ll find the all-important 12V socket to recharge your phone, but there’s a flaw there too: when it comes to keeping your phone charged while using it as a sat-nav (which is almost inevitable) then you’ll soon discover the cable prevents the compartment lid from closing, which is a design faux pas. The news is better for the left compartment, which hides the fuel filler. Unlike many other scooters with their underseat fuel fillers, the petrol cap’s location on the Django means you won’t need to lift the seat to refuel and risk dripping fuel on whatever you’ve got stored or contaminating the contents with petrol fumes. If only the underseat storage did better to accommodate a broader range of helmets beyond a small full-facer (open-face lids are fine). Some scooters now offer stop-start fuelsaving technology, which automatically cuts the engine while stationary to save petrol, but it’s not as if you’ll be at a standstill too often when you can whisk through the city’s cracks and crevices and disappear into the distance. In any case, fuel use is around four litres per 100km, which means a range of about 200km from the 8.5-litre tank. Those integrated pillion footpegs are a lovely touch, but it would’ve been nice to see them covered with colourmatched bodywork to produce a flush appearance when stowed, like the exterior door handles of a modern Aston Martin. So, yeah, a few nits picked to an otherwise-lovely machine. As a credible and more affordable alternative to the retroscooter mainstay, the Django has the looks and certainly the charm to attract a modernday Audrey Hepburn. Or Gregory Peck. Happy holiday. 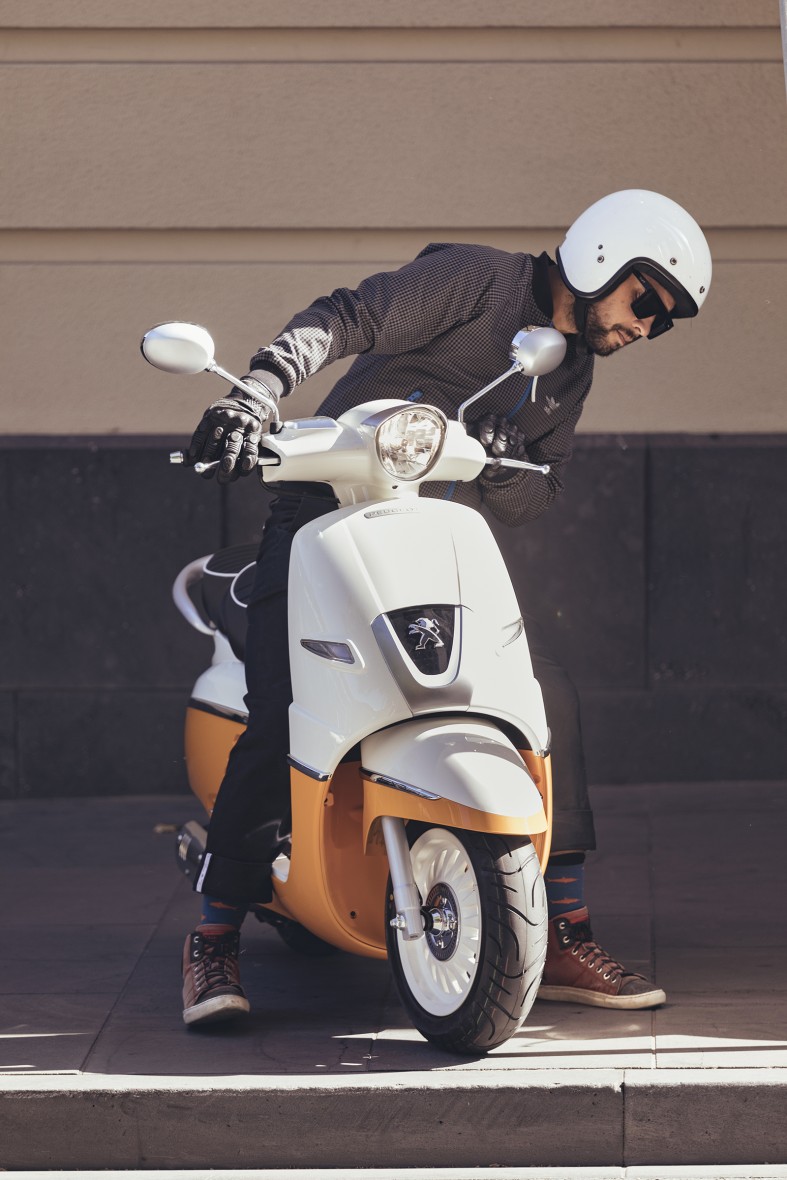 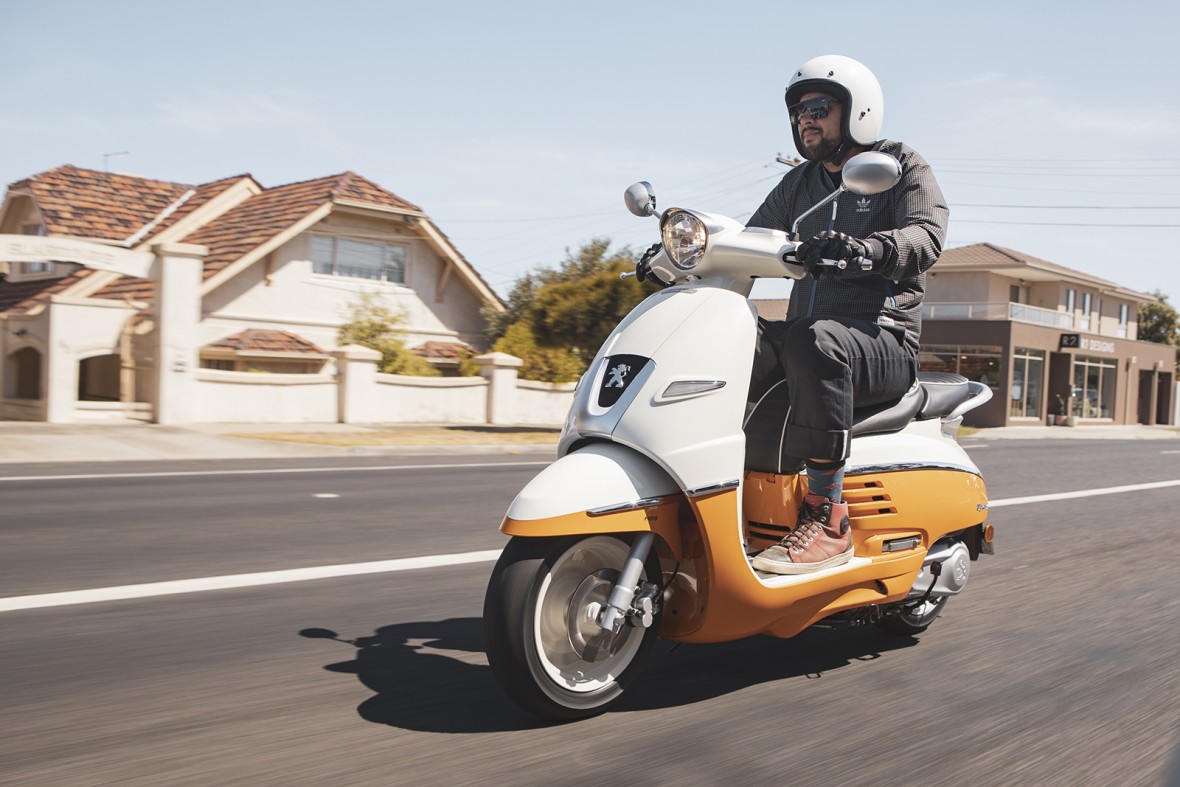 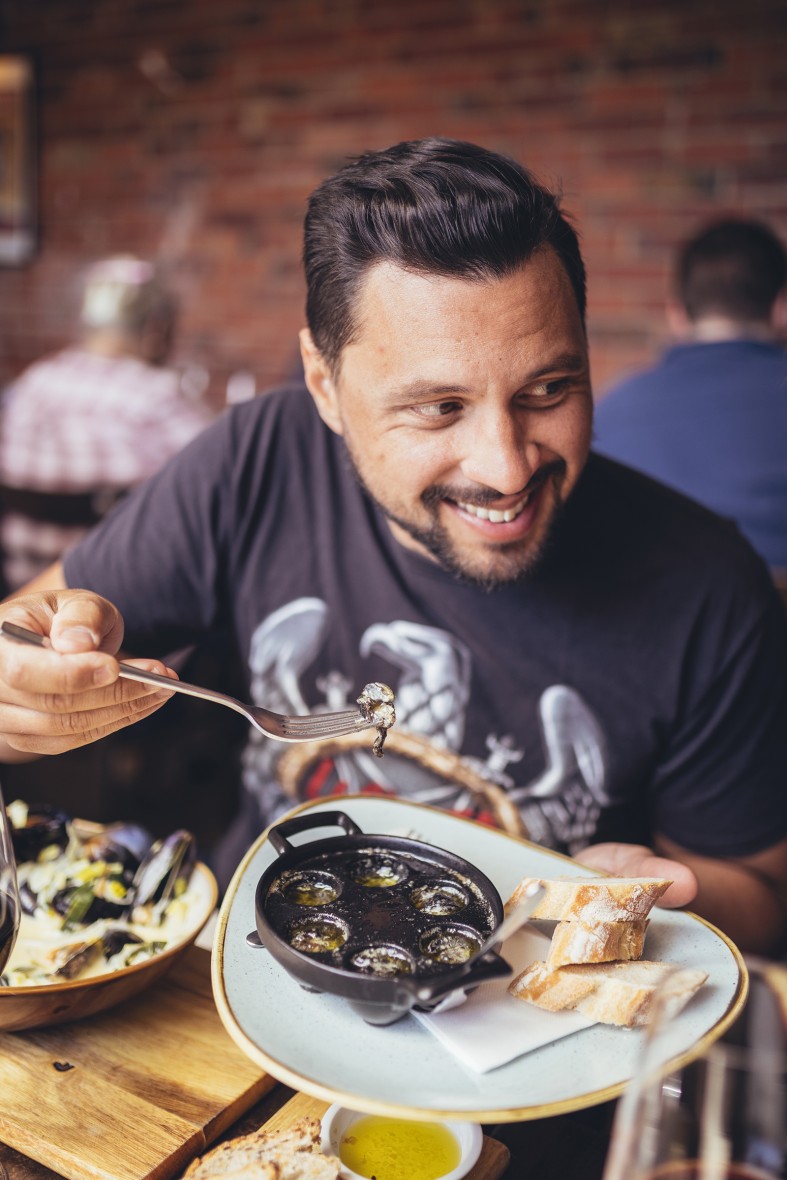 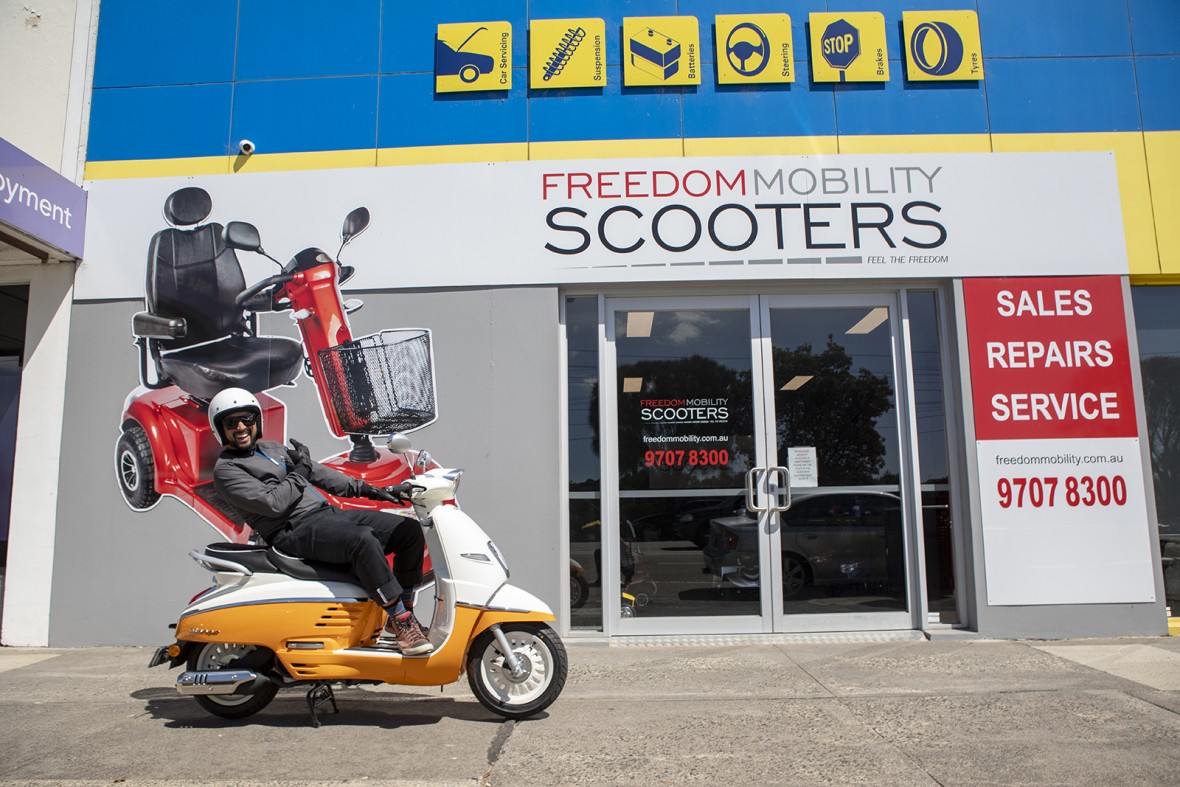 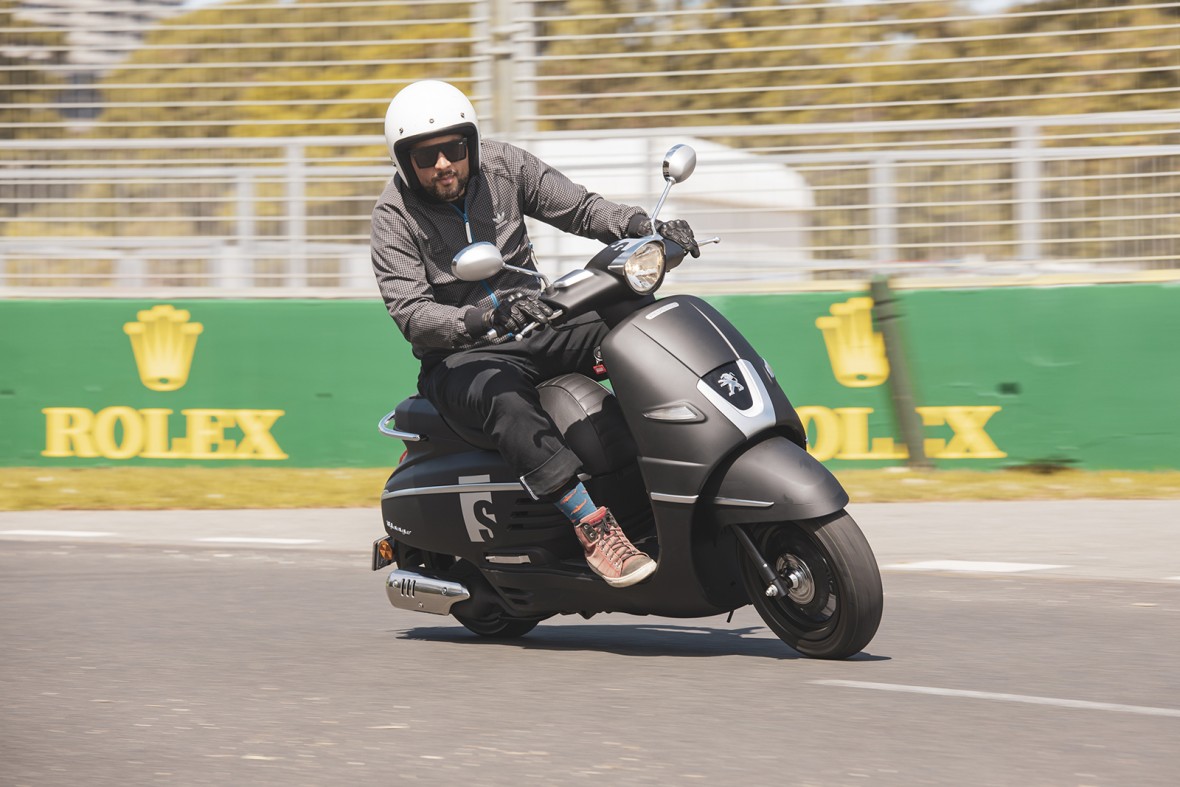